I am an experienced preservationist having worked on other preserved locomotives including 37215, 45149 and 26043 at the Gloucestershire Warwickshire Railway from 1994 onwards.  I joined RRRG early on in the project and very soon realised rebuilding the electrical systems of 50030 would be something if a challenge! Since then I have rebuilt the electrical cubicle to a high standard from almost nothing and I am looking to move on to the cab wiring in 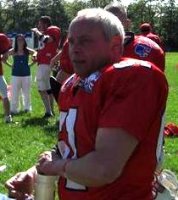 Outside preservation I am interested in British history, particularly the Roman and Anglo-Saxon periods, the 19th Century Zulu Wars as well as 20th Century military and naval history. I have been on two archaeological digs and participated in the Time Team Big Dig in 2003, when I excavated part of my back garden and found a 15th Century clay hearth and pottery.

My father lectured on nuclear physics some years ago and I became very interested in this most fascinating and complex of subjects, eventually gaining a degree in particle physics through the Open University in 1990. I also played American Football between 1985-2003, and am now part of a Cosplay group called the UK Colonial Marines, who dress and attend Comic Cons as the soldiers from the film Aliens.