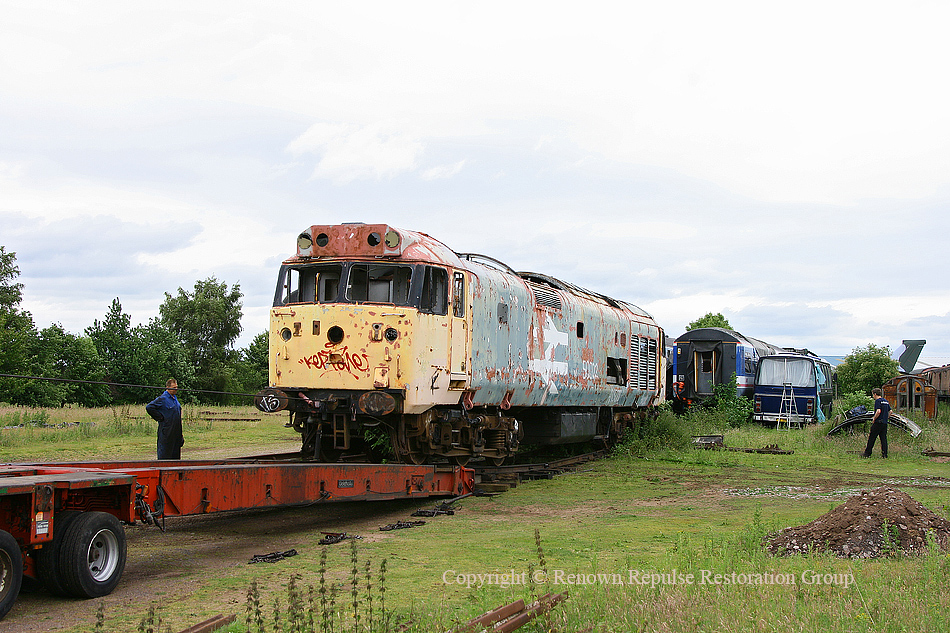 Following withdrawal from British Railways service 50040 Leviathan (also known as Centurion in later life) was moved to C.F. Booths for disposal. Along with a number of other class 50s it was stored there for a number of years awaiting developments with the engineering charity Operation Collingwood. The heavily-robbed locomotive was eventually sold by C.F. Booths to a private owner for preservation, at around the same time 50023 Howe was also sold. Howe moved to Barrow Hill where substantial work was undertaken on it prior to the preservation attempt floundering, and Leviathan was moved to the Coventry Railway Centre. Unfortunately little significant work was undertaken on 50040 at Coventry which resulted in further deterioration in its condition. The locomotive did change hands a couple of times, but eventually in 2008 Leviathan, which the majority of people accepted was too far gone for anything other than a complete rebuild, was sold to Paul Spracklen, owner of 50026 Indomitable, for use as a source of spares. The main generator was retained by its previous owner for use with 50008 Thunderer, and Paul was able to obtain some vital items for 50026, including the radiators. Although heavily robbed there were unbelievably quite a few items on t50040 that were in better condition than on 50029 and 50030, and would benefit RRRG, fortunately Paul was kind enough to allow us the opportunity to get what we could off it, in the limited time that was available. As such RRRG member Mark Burrows was on site at Coventry on the 27th June when 50040 was loaded for its last ever trip. In the above picture new owner Paul Spracklen is seen overseeing the start of the loading process. (Mark Burrows)