It is April 1984 and 50030 is approaching Bristol Temple Meads from the south west, passing beneath the Bath Road overbridge in this shot by an unknown photographer taken from the end of the platform. Unfortunately we can't identify much more such as the exact service that Repulse was hauling, as the sub-par lighting conditions make it difficult to discern the time of day. Class 50s were common on cross country services from the south west to the north east or north west, such as Penzance to Liverpool. The Hoover would usually take the service as far as Birmingham New Street where a London Midland Region locomotive would take over for the journey forward, whilst the 50 waited around at New Street to drop onto a service that would take it back to the Western Region. However it was not unknown for the 50 to be in charge throughout such as on 14th December 1985 when 50016 worked the 07:43 Bristol Temple Meads to Liverpool throughout, in place of the booked HST. 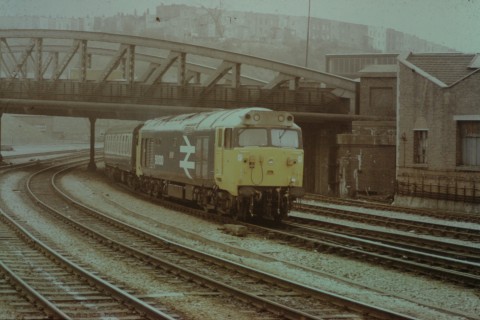