A key priority for us now that the power unit is out of 50030 is to get the bodyshell watertight. There's no point us putting overhauled mechanicals and electrical machines back in there if they are only going to get wet! The same applies to the cabs as we move on to refitting and restoring the controls and air pipes behind the driver's desk. We've said before that our aim is to ensure 50030 has a very long and secure future ahead of it in preservation and by doing this work now we make her future even more secure. It's also now at least ten years since 30 saw a proper lick of paint and we have to respect Peak Rail's wishes not to have a pair of rusty-looking wrecks cluttering up their site. So we've been paying experienced locomotive welder Ian Williams like we've mentioned in previous work party reports. As we said in the last report, work had to be suspended because of the lockdown but now we can go back on site in numbers we are determined to crack on, so on site today were Mark and Robert Burrows, Carl and Sofy Looker plus new volunteer Jay Hirst, as well as myself.

Mark and Robert were scraping, filling, sanding and painting on the roof and front of No.1 cab, while Carl and Sofy did the same to the front of No.2 cab. Jay and I were in the engine compartment, removing loose paint and rust from areas on the inside of the roof, and adding red oxide primer around where Ian the welder will be doing replating. Jay is surrounded by a cloud of rusty dust! We've found since the engine was removed that 30's roof area is a fair bit worse than we thought it was, but fortunately Ian has produced a very good quote for us on fixing the worst of it.Photos by myself and Jay Hirst. 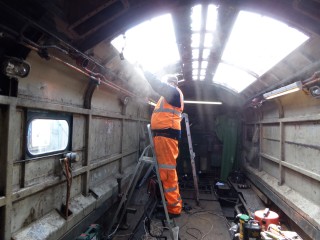 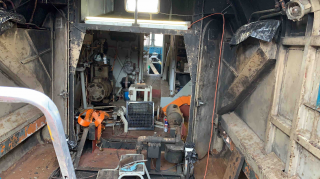 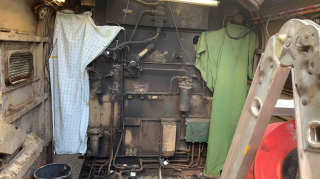 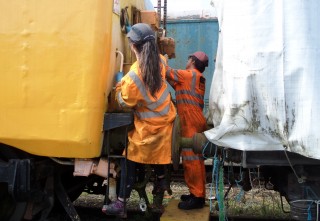