​A compilation of work party reports since our last updates.

Dave Rolfe and Peter Carter continued to put the new oil into the ex-50008 power unit, I refitted the reverser actuator cylinder and checked out the battery charge diode again, which still gave strange readings, and re-threaded some more of the electrical cubicle cover holes inside 50030

At the request of Peak Rail we have contracted a welder to smarten up the cab of 50037, as a prelude to work on the cab sides of 50029 and 50030. The idea is for the welder to practice on 50037's cab before starting on 29 and 30. The welder Paul attended site on this occasion and began work on the cab.

Dave Rolfe continued reorganising our spares in an efficiency drive to ensure the parts we need for 50030 are closest to hand as the completion of that locomotive inches closer, while I carried on re-tapping the holes at the top of the cubicle for the louvres, and having a good sort out of my tools, which had become hopelessly mixed up.

Dave and I also cleared some non-compatible electrical relays from my workbench in BG1, and made some space on the racks for two boxes of useful parts which had been put on my bench ages ago and left there.

Paul the welder carried on working on the 037 cab, but due to showers, much rusty metal on the cabsides and the unsuitability of the arc welder, he didn't make much progress. Dave will sort a gas bottle for the next time Paul comes up in a fortnight, and Paul will source the required regulator and hose, so he can start using the proper Mig welder.

Dave Rolfe had been, and continued today, painting inside the filter compartment next to the rads. I glossed three more electrical cubicle doors, and brought another home to clean and undercoat. I re-checked the battery charge diode cables with the same result, one cable belled to both the CU9 terminal bar and the main earth terminal bar, so I removed it to take to Washwood Heath for the DCR guys to check, as they had offered to do so.

I then checked both cables again, and this time they belled out as they should, which suggests part of the diode unit has failed rather than a cabling mistake, which was the other possibility. I also picked up the other one from RRRG stores so they can check that too.

Dave told me he'd looked last week at the issue of oil coming out of a water pipe on the PU, and it would appear the heat exchanger is leaking inside, so it will need removing and changing for the spare. He had also drained the exchanger unit and got a significant amount of oil out of it.

Battery charge diode ex-50030 (left) and a spare from RRRG stores (right). The ex-loco component gave suspect results during routine testing and both were taken for more in-depth tests courtesy of another group.

Today, Dave Rolfe continued work in the filter compartment by the rads, and starting to reburbish the fire bottle activation linkages. Wes Needle carried on repairing and replacing frost damaged air pipes in 30's No.1 cab, and continued freeing off the power controllers. Paul the welder did more work on cutting out rotten steel and replating the spare cab. I could only make half a day today, and cleaned another cubicle cover, undercoated it and glossed two more covers. A selection of progress images from today are in our gallery below. 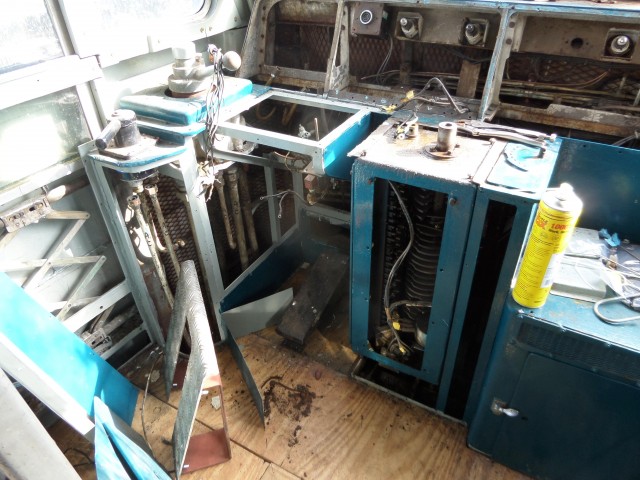