Announcement of working party dates and details of restoration work carried out at working parties.

Mark brought two of the refurbished KV10s, paperwork, test sheets and circuit diagrams up to site. After a test fitting they were removed once again! Dave, Pete, Ian and I hoisted one of the intercoolers up onto the ex-50008 power unit and bolted it in place. The other is ready to be refitted but needs painting first. Dave started making a hoist arm to be fitted on a corner of the container over the workbench. I started fitting the cubicle air circuit pipes, which was somewhat difficult with all the cabling in place, so if I ever do that again, the lesson is fit the airpipes before the cabling, then the cables wouldn't be in the way!

The new airpipes are just visible in the photo below, between M4, M5 and M6.

I discovered the air connections on the reverser air cylinder are a different thread to all the others, so I brought it home with me to take to the supplier I got the other fittings from to see if they can provide the correct-thread fittings for it.

A good day on site today. Former regular working member Wes Needle joined us for today's workparty.  Since getting married and starting a family, Wes hasn't had much time to indulge his chosen hobby, but because they had taken a break in a holiday cottage not far from Rowsley, he was able to take a day to join us while his wife Keren and the nippers went on the train.

Dave Rolfe continued cleaning and painting power unit pipework, then he, Wes, Peter Carter and Ian Kemp finished overhauling one of the intercoolers and reassembled it. They also started unfastening one of the compressors on 50030 ready for it to be removed as there is an overhauled one ready to take its place.

I located the fittings and tubing I had purchased some time ago to replace the air circuit in Repulse. There are different threads that have been used on these fittings at various times, so it was a bit of a gamble whether we had chosen the right thread, but fortunately when I tried the fittings in the motor and divert contactors, they screwed in fine. I had made a diagram some time ago of the routing and connections of the air circuit in 50021, so I am now able to copy it in Repulse. I also finished off connecting up the newly-fitted reverser in the electrical cubicle of 50030 with all its wiring and connections.  Even the weather was kind to us!

On 29th June a long-running sub-project within the electrical restoration of 50030 took a substantial step forward. I got the proper reverser (Class 50 specification) fitted into Repulse, with help from Dave Rolfe, Peter Carter and Ian Kemp as it's so damned heavy. We had to jiggle it about to get it to fit properly, but did it in the end. I attached the divert cables at the rear, but didn't have time to do the auxilaries at the front as I showed two visitors round Repulse. We are always happy to show enthusiasts around our project so if you want to take a look inside our locomotives then get in touch with us either via the website or our Facebook pages and we will do our best to accommodate you.

Also on this date Dave, Ian and Pete also continued sorting fuel and water pipework recovered from 50030's power unit to replace damaged sections on the ex-50008 unit.  This unit is destined for use in 50030 when complete - the existing power unit in Repulse was in acceptable condition when we acquired the loco, but has high engine hours and as part of our policy of overhauling our 50s to a very high standard in order to give them a long and trouble-free career in preservation we decided to overhaul one power unit totally.  The existing unit in Repulse will be re-used inside 50029 because the engine in Renown has serious problems following the seizure which ended the loco's BR career.  We don't know for sure but are aware of the possibility that the unit in 50029 may only be usable as a source of spares.  Power unit work can be one of the most gruelling of the practical restoration projects as the same task often has to be done at least sixteen times, sometimes even 32 or 64 times!

On 14th July I attached the reverser auxiliary contact wiring after showing another visitor round Repulse. Meanwhile, Ian, Pete and Dave fitted the fuel feed and return pipes to the ex-50008 power unit that they had previously salvaged from the power unit inside Repulse. 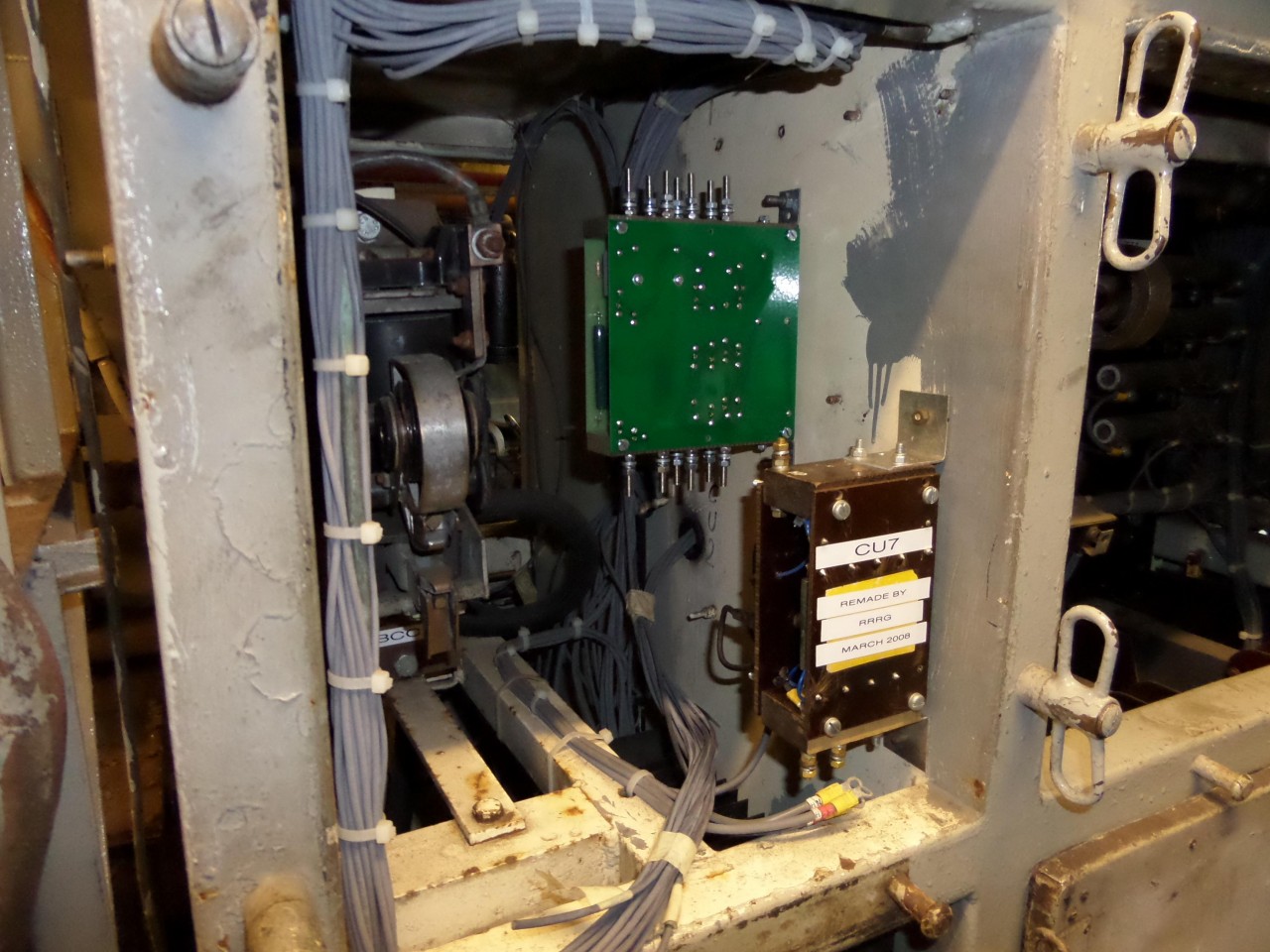 As it rained almost all day yesterday, even though the forecast was for dry weather, I decided not to cart the reverser outside as I've cleaned it, so I test fitted the newly-made CU2 field divert and CU7 ETH detector units into 50030's elec cubicle. While the CU7 can go in its original position, the original position for the CU2 had the cable connections very close to the cubicle frame, so I drilled a couple more holes to put it in a better position.
Inbetween the heavier bursts of rain, Ian and Pete removed the fuel feed pipes from 008's power unit as they'd been bent during the lift at Crewe when we bought and moved the PU about 8 years ago. Dave was painting pipes taken from the PU inside Repulse to replace them.
I also took the opportunity to get some more pictures of Mark's work last weekend on the generator conduits. 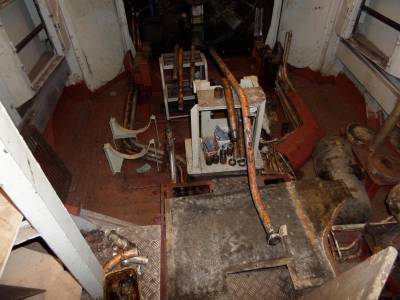 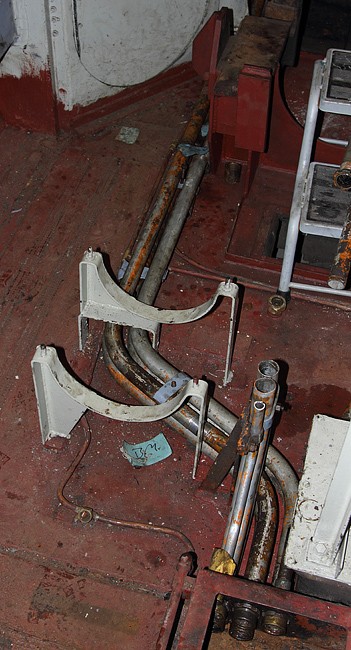 Dave Rolfe and I had a very wet Saturday at Rowsley last weekend (I'd gone on the Saturday as Sunday was my Wedding Anniversary), the weather finally cleared around 5 o'clock!

Given the weather we both found things indoors to occupy ourselves, Dave spent part of the day unbolting and freeing off sections of the radiator louvre operating mechanism. His remaining time was spent sorting out the various fittings, clamps, etc, that are needed to refit the fuel rails to the power unit, and checking their condition, cleaning and painting the metal sections of the clamps. I spent most of the day in 50030's generator room sorting out the best sections of conduit, from our collection of bits ex-50023, 50030 and 50040, to make up the remaining set of conduits. By the end of the day, I had cut sufficient sections to lay out the last of the conduit runs, all that remains to do now with this job is to strip the years of paint and dirt off them, thread the ends of the cut sections and fit the relevant couplers and locking nuts. Hopefully another day's work should see the conduit conundrum resolved. In the process I also identified ¾ of a set for one side of 50029.